“This is Grady.  Hooper, tell me you’ve got some good news for me.”
“To tell you the truth, I’m not sure what I have. We’ve tested the tissue and that…I don’t know; slime stuff, that’s covering most of the remains and we can’t figure out what the heck it is. I even sent samples out to a few of my old professors and they’re equally stumped.”
“Great,” Grady sighed. “I’m coming up blank here as well. We managed to salvage some video but it raises more questions than answers.”
“If you want, I’d be happy to take a look at it. It can’t hurt, right?”
“Barker, can you send the video over to Hooper? Can we do that?” Yes? Good, here talk to him and get his info. I need to pop over to the hospital and check on Poole. I swear, if that doctor hasn’t made some progress with Poole he’s gonna end up a patient there too!”
Lack of sleep teamed with a never-ending parade of dead ends had chewed away at Chief Grady’s nerves, wearing them down to the raw nubs. He made a concerted effort to take deep breaths as he rode up in the elevator, harnessing his focus on keeping his cool.  Room 908 was teeming with medical personnel: nurses, therapists, aides, all attempting to draw the young deputy out from the shell behind which he’d been hiding.  Grady’s appearance was met with icy disregard but he didn’t care, lives were in danger and it was his job to protect them.
“I don’t think you’re going to get much,” one of the nurses chirped. “Doctor Garrett upped his meds. Your deputy has been pretty much comatose all day.”
Much to Grady’s dismay, the pert nurse wasn’t exaggerating.  As far as he could tell, Poole had no clue anyone was there in the room with him. Not even a flicker of recognition registered on his face as he was peppered with questions.
“C’mon, buddy, I need your help. Please? Can’t you just try?” Grady pleaded to no avail.
After thirty minutes of appeals, demands and a touch of grumbling, the chief finally threw in the towel.  The medical staff said nothing but a titter of giggles erupted as he stalked down the hall.  He sought out the information desk and had Dr. Garrett paged. I’m not running all over the place looking for him, Grady thought, let him come to me. After repeated pages, the doctor finally arrived. He had the decency to appear out of breath, as if he was rushing to accommodate the lawman.
“Chief Grady,” Dr. Garret exclaimed. “Sorry to keep you waiting. I wasn’t expecting you today. Whew, it’s been a crazy day! Let’s go to the conference room and I’ll have my assistant order us a late lunch.”
After a longer lunch than he’d planned, Grady popped in on Bob the Coroner. He knew he was grasping at straws but there was always the off-chance someone had made an observation that they’d overlooked previously.  Together, he and Bob looked at all the facts and racked their brains trying to speculate the true cause of death.  When he left, they were no closer to an answer than when they’d started.  A day full of running around with nothing to show for it, his inner voice whined. The days are getting shorter; already the sun is making its way to the horizon. Grady was caught up in his inner monologue when his cell phone rang, startling him back to reality.
“Grady? Oh, thank God! Please, I need your help. Please, please hurry!”
The frightened and tearful voice on the other end was Mayor Farmington. The urgency in Dale’s voice made Chief Grady forget all about his beef with the mayor.
“She’s gonna do it. There’s no time, please, you have to stop her. Go get her. Bring her back. I’ll do anything!”
Mayor Farmington dissolved into a torrent of tears and heart-wrenching sobs, pausing only to sniffle back the gobs of snot, threatening to gush forth from his nose.  Between the fitful gasps and sobs, Grady eventually managed to piece together the gist of the story. There had been some bickering the night before and again in the morning before Mayor Farmington had gone into the office. Knowing he’d been out of line, the mayor had cut out a little early from work and stopped at the florist on his way home.
“I-I-I knew she was mad at me b-b-but this?” He wailed.
“Dale, just take a deep breath and tell me. What happened and what do you need me to do?”
“Letter, she left me a letter. She’s gone to the beach. She’s gonna let it kill her. You have to stop her!”
A torrent of expletives flew from Grady’s mouth before he could catch himself.  Popping the Bluetooth earpiece into his ear, he ran to his car. With sirens blaring, Chief Grady sped to the beach, all the while, listening as Mayor Farmington read the letter aloud.  Though his voice hitched and tears splattered the page, he continued reading, only hesitating where either Sylvia’s tears, or his own, had smeared the ink. 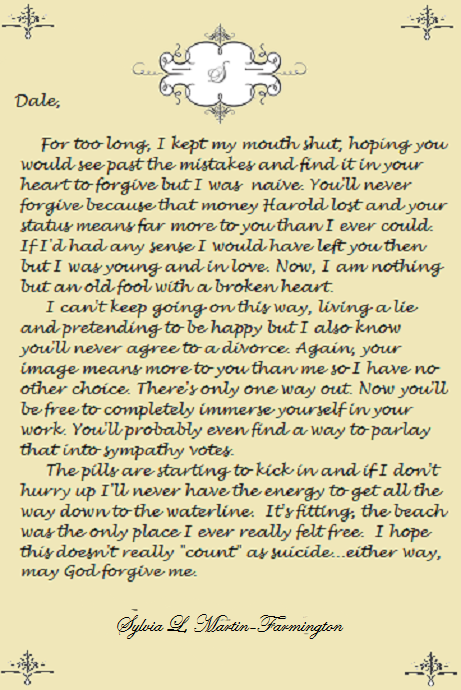 As Grady’s cruiser screeched to a halt, he disconnected the call and sprang out.  The sun’s lazy descent was nearly complete and there wasn’t a moment to spare.  Running on the sand felt like a flashback from his worst nightmares. His feet sank deep into the powder, making it difficult to pick up speed, while his eyes scanned the beach for signs of Sylvia Farmington.  Finally, he spotted a something resembling the female form close to the waterline.
“Sylvia!” Grady screamed.
Please, God, let her be alive, repeated over and over again in his mind. With no time to check, he scooped her up and draped her over his shoulder as he sprinted as fast as the sand would allow.  Overhead, the fiery oranges, reds, and pinks of sunset were melting into deeper, richer tones. Grady’s prayer switched to, “please God let us both live” as drew closer to the steps that would bring them up to street level.
“Nearly there, Sylvia,” he panted.
Grady resisted the urge to look back; instead, he allowed the panic to fuel his final dash. The last fifty yards to the steps were a race against Mother Nature and whatever forces were at work in the ocean. Each footfall seemed to trigger a darkening of the sky and panic seized Grady’s heart in an iron grip. Once his feet were firmly planted on the street’s macadam, the chief sucked in huge gulps of air, hoping to calm the savage pounding of his own heart.
“We made it,” he panted.
A sudden, undeniable, overwhelming thrill to be alive filled every fiber of his being. He wanted to dance, cry, sing and jump for joy.
“That’s right,” Grady cried out. “We made it! We’re alive…ALIVE!”
He turned, facing the water as the sun disappeared from sight, and stared out at the rolling waves. Still carefully balancing Sylvia on his shoulder, Grady thrust his fists high into the air and extended his middle fingers.  We’re alive.