No doubt you're still feeling more stuffed than the bird you'd gobbled up on Thanksgiving day but I have the perfect cure for your post-turkey blues. A few of my incredibly talented author friends have offered to take over my blog until after the new year so that I could get book 2 ready for the editor. Tonight, I am featuring one of those authors. Friends, it is my distinct honor to introduce you to, drum roll, please ... the one, the only, Stephen 'Koz' Kozeniewski!!
Koz is serving up a tasty sampling of his mind-blowing novel, Billy and the Cloneasaurus. Just in case the title alone didn't provoke you to pull up Amazon to order your very own, right this second,[http://www.amzn.com/B00L7RXG6U] I have lots more to whet your appetite. Let's start with the synopsis:

Six billion identical clones make up the entire population of Earth, and William 790-6 (57th Iteration) is exactly like everybody else. In his one year of life he will toil in suburban mediocrity and spend as much cash as possible in order to please his corporate masters. When 790’s first birthday (and scheduled execution) finally rolls around, a freak accident
spares his life.

Living past his expiration date changes 790 profoundly. Unlike other clones he becomes capable of questioning the futility of his own existence. Seeking answers in the wilderness, he discovers a windmill with some very strange occupants, including a freakish, dinosaur-like monstrosity. Which is especially strange since every animal on earth is supposed to be extinct…

Dark, haunting, and blisteringly satirical, BILLY AND THE CLONEASAURUS is the story of one “man’s” attempt to finally become an individual in a world of copies. 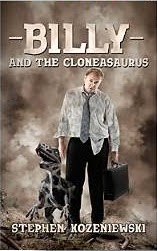 William 790-6 reached up and tugged on his shirt collar.  He cleared his throat, not really knowing what else to do.  64 didn’t make a move and seemed to be waiting for 790 to prompt him.  It was typical clone behavior, but, of course, that meant that 790’s own inclination was also to not move, but to wait for someone else to prompt him.  With an exhausted sigh, 790 gestured at the remaining half of 789 still stuck in the slurry machine.

“Why don’t you, uh, reach in and see if you can clear the, uh, obstruction?”

64, the operator, scratched his chin lightly with the back of his fingernails.  It was a mannerism that 790 cultivated, too, of course.  All the clones could read one another like books.  It was just like looking in the mirror.  This particular maneuver appeared to indicate a gentle disinterest, but in fact, would be expressed in words as, “Heck no, not in a million billion frickin’ years.”

“Well, I ain’t sticking my hand in there.”

Then he stared at 790 expectantly.  Briefly, 64 glanced down at his watch.

“Almost quittin’ time,” he commented, as Williams the world over did at around this time every day.

790 sighed, defeated.  There was nothing for it.  He was the next in line for the sluicer, after all.  If he lost his hand removing the jam, it just meant one hand less that the machine would have to process in a moment.  Heck, 64 probably wouldn’t have minded if he just jumped in and processed himself along with the top half of 789.  Somehow, though, that would have lacked dignity, and William clones were nothing if not concerned about their dignities.

“All right, let’s have a look,” 790 said, moving towards the clear plastic tube in the center of the room. 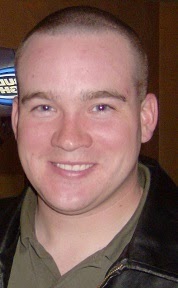